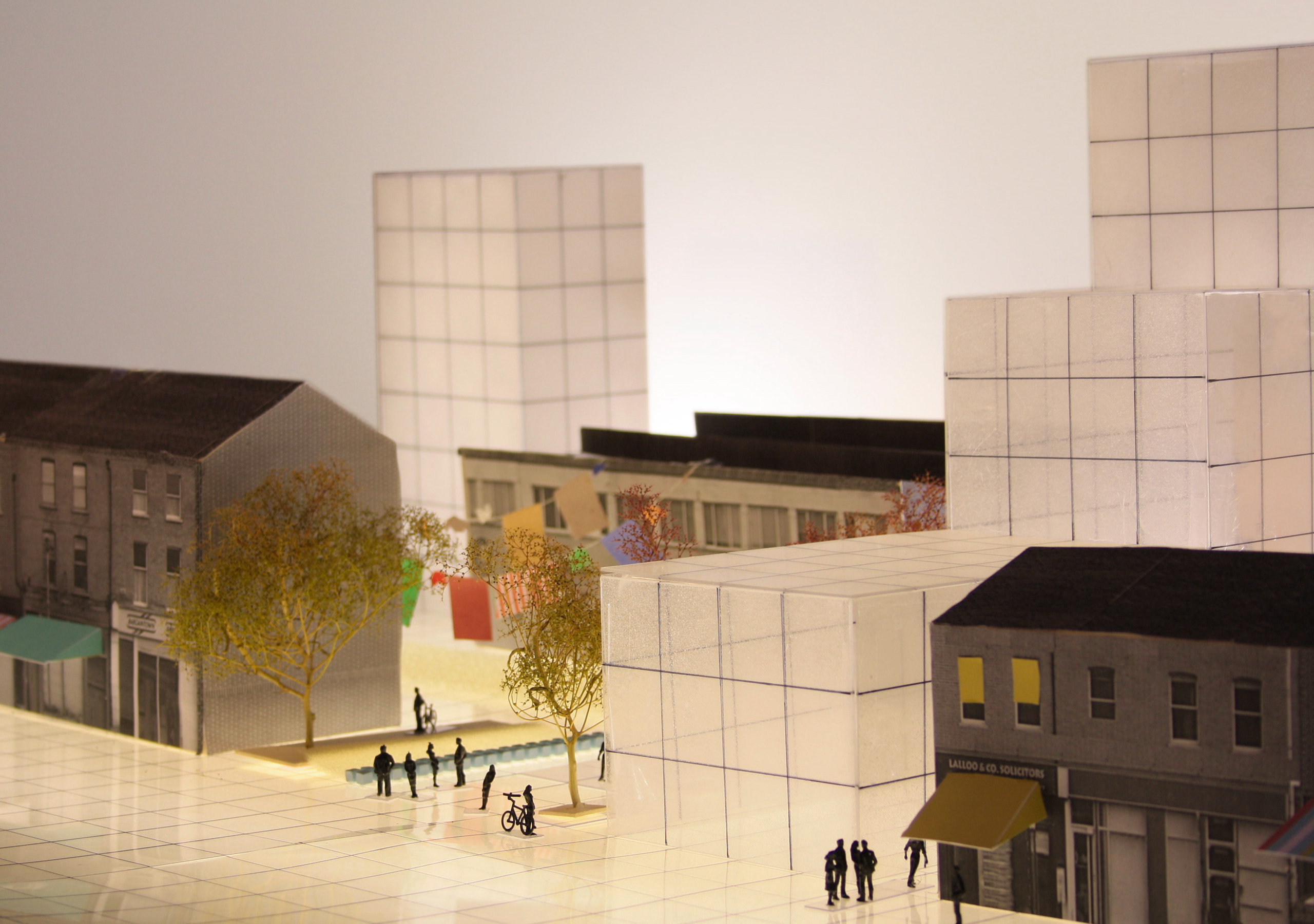 After a booming period the Celtic Tiger is now under the pressure of the financial crisis that makes every real estate project hard to develop. At the same time the city that has been built over the last few decades doesn’t seem completed, and the issues of the urban sprawl in the metropolitan area and the lack of high quality public spaces in many central areas are still present.

This research project deals with these issues and proposes a new identity for the west side of Dublin building a system of public spaces as the main structure of small housing densification projects.

Over the last few decades, Dublin has undergone a relevant densification of its urban fabric. Different strategies have been applied to the various parts of the city, each one leaving some unsolved problems behind that now need to be re-thought in order to foresee a sustainable future for the city.

Dublin’s city centre is along Liffey river which runs west to east. The cultural centre of the city is located on the south eastern bank. Trinity College, Georgian areas and the most important commercial streets are there. Here the city life is vibrant and the public spaces are very well designed.

This area is completely new and except for a few surviving buildings, a new city pattern has been superimposed onto these areas. All the money invested was used to give quality internally to the Docklands and now that area looks like a kind of new pole of attraction not fully integrated with the rest of the city. A new extraordinary place that is an addition to those already existing in the city centre, but that is not a replicable model to other parts of the city, because it requires huge investments, big empty areas and the inclusion of valuable features to function properly.

Due to the current financial crisis, the Docklands development has not been completed yet and many structures which have already been built are not occupied.

What might be the next step after the Docklands development considering that the architecture cannot solve the financial problems? How can we redirect the population spread from the metropolitan surroundings to the urban centre?

Dublin’s city centre is relatively small but it includes derelict zones, abandoned old industries and dilapidated buildings in its

West Side. A regenerative urban process of the west side could be the way to move from a polarized city to a city with homogeneous intensity throughout its urban fabric.This wouldn’t be a reproduction of the historical center but rather a place focused on day-to-day living.

The West Side is characterized by a large number of pliable blocks that can be easily transformed by a process of renovation. Differently by the East Side of the centre, with its well established blocks, its system of public squares and its urban scale functions, the West Side has to be transformed to become another high quality space in the heart of the city. The project underlines the existing main functions and individuates new potential spaces to host the new ones.

The requalification of the actual net of streets and the introduction of new links provides a new system of streets transversal to the Liffey river, creating an independent structure for this part of the centre. The pliable blocks are the places where the private estates can be developed enriching the city with small collective gardens, little squares and walking paths.

The urban densification inside the centre of Dublin has to be made alongside with a proper system of public and collective spaces.

The choice to live in an apartment building, refusing to live in a detached house, can be easily addressed only if there are high-quality urban spaces next to the building: public gardens and playgrounds instead of small backyards, underground parking lots instead of front door parking, local services within walking distance.

Starting from typical urban sections of the Western side of Dublin, this research project formulates various densification scenarios that are differently combined in relationship with the urban contexts.

The project’s aim is to reinforce the public urban structure and at the same time to provide collective spaces and facilities for new housing buildings, creating a system of open spaces within the blocks.